What Is The Perfect Temperature For Vaping Your Cannabis?

As veteran cannabis consumers prefer traditional toking and the occasional pot brownie or dab, many new and seasoned marijuana users — whether recreational or medicinal — are turning to vaping.

Since different compounds can be transformed into vape juice, the history of the first vaping devices originates in the tobacco industry. Herbert A. Gilbert — who is said to have smoked two packs a day for years before quitting cold-turkey around 20 years ago — is considered the inventor of the first electronic cigarette, having first patented the design in 1963.

Of course, in more recent times, cannabis consumers have created their own vaping devices for both liquids and dry herbs. Although it doesn’t take an expert to vape, it’s important to pay attention to how hot your vape burns at, because your high depends on it.

The first step is to have a precision vaporizer, or a vaporizer that allows you to adjust the temperature in the first place. However, since these products aren’t regulated, you can expect some inaccuracy in these device readings. One vaping device that burns at 200° Fahrenheit might actually burn at 198° or even 190°, for instance.

Now, let’s get down to the science of weed. The next step is to examine what cannabinoid acids — which are activated by heat — you want to target. Use our chart below to guide you through cannabinoids, flavonoids and terpenoids. 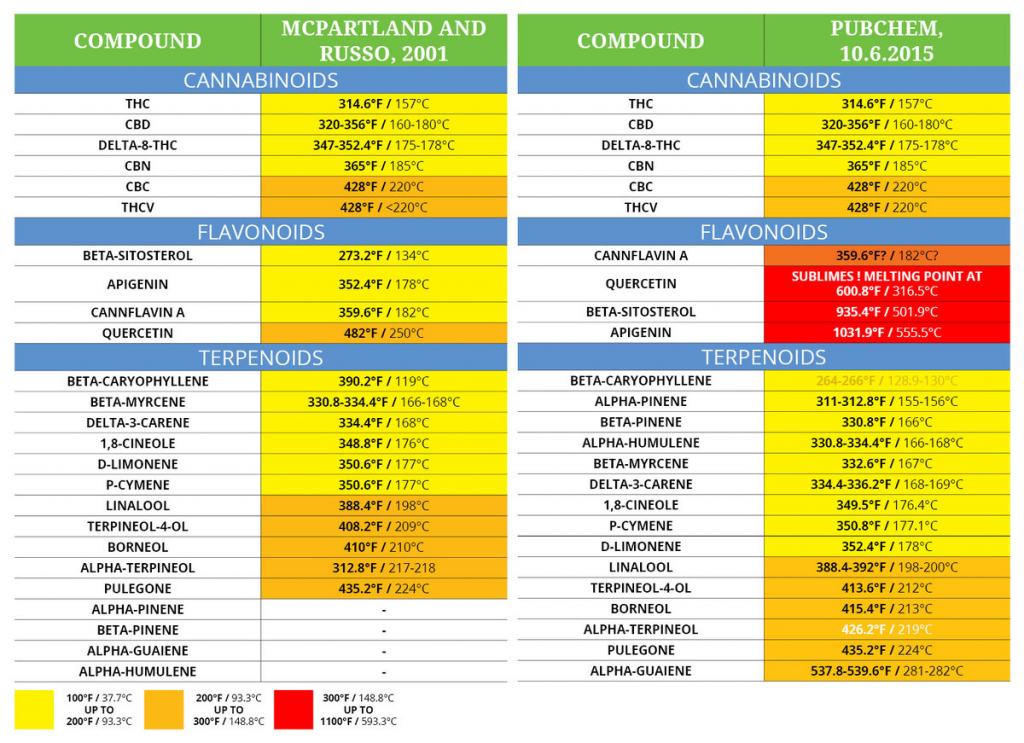 Unfortunately, these estimations aren’t a case of one size fits all and instead are meant to be suggested advice. Cannabinoids react differently in everyone, and some people vape recreationally (aiming for a stronger head high) compared to those who vape medicinally. Rather than aiming for a perfect temperature, your goal should be to find the approximate temperature that produces the high you want and prefer.

However, don’t set your device to where it’s possible for it to overheat. We advise against vaping over 400°F or 204°C to avoid combusting your device.

Those who vape experiment using trial and error — much like with smoking, drinking and eating — since there has been little credible medical research conducted on cannabis in the United States. This is due to the plant’s Schedule I ruling by the Drug Enforcement Administration, which lists cannabis as a drug “with no currently accepted medical use and a high potential for abuse.” The federal criminalization of cannabis is what prevents researchers from conducting lifesaving medical research.

Plus, because most studies are focused on dry flowers, there isn’t any valid US research at all on safe vaping consumption.

Fortunately, researchers outside the US are ahead of the game. Swiss researchers recommend 410°F or 210°C as a suggested universal vaping temperature, according to a 2016 University of Bern medical cannabis study.

While we can provide you with estimations that have worked for others, the best solution for now is to consult and communicate with the cannabis community — including your friends and of course, your budtenders — to crowdsource and discuss consumption methods. After all, community teamwork has kept the industry united, even as prohibition and legislation continue to be problematic.