The Most Outrageous, Secret, Hidden Cannabis Grow Ops In The USA

Despite the fact that 29 states plus the District of Columbia now have some sort of medical or recreational cannabis policy enacted, most of the United States is still in a position of cannabis prohibition due to restrictions on home growing. Even if states like Massachusetts allow at-home growing of personal-use cannabis, wannabe cultivators are only allowed a maximum of six plants per person, depending on how many people over the age of 21 years live in the household, and also what kind of residential property they live in.

This is why there are so many secret grow ops hidden from public view.

However, law enforcement is savvy and has the GPS and heat-seeking technology needed to seed through underground farms and gardens — and if you’re not careful, cops might not even need such advanced technology, if they hear about your secret garden through word of mouth. Indeed, the largest underground operations have been exposed — or, at least, so we believe.

Some hidden grow ops are pretty epic and seemingly unimaginable. In March, local police in San Bernardino, California found Stephanie Smith’s multimillion-dollar fortified property containing more than 35,000 cannabis plants, which were housed in three separate buildings at the one location. Smith is now pursuing a case with the county court system against cannabis monopolies within the industry that hinder individual growers like her from getting involved.

While Smith was in the process of getting licensed at the time of the raid, she isn’t the only person operating without full cannabis licensure in the state, with only 1 percent of growers in California having obtained their official paperwork, since only a certain number of permits and licenses can be issued at this time.

Not all of these operations are indoor gardens, either. Back in June 2015, cops raided an outdoor grow consisting of 30,255 cannabis plants, located near remote Bull Mountain in the southwest corner of Virginia. At the time, it was the largest outdoor cannabis farm ever found in the state, with the crop’s street value said to be worth between $30 million and $105 million. The plants ranged from eight inches to two-feet tall in size, and it took police more than 24 hours to remove them (and likely destroy the farm, including its equipment) from up the mountain.

During that same month, Texas authorities seized 109,000 plants, with an estimated value $175 million, making it one of the largest documented raids in the Lone Star State. Discovered by a deer hunter, the grow op was spread over 29 fields and included high-tech irrigation systems and underground power generators.

But the biggest bust in Texas doesn’t even compare to the big raids in California. In July 2009 (are you ready for this?) and in a single bust, authorities confiscated more than 330,000 plants from the fields of Fresno County. The crop’s worth? A staggering $1 billion.

And not all of these operations are glamorous. Sometimes, they’re fairly primitive and relatively small. In 2014, police found a hydroponic cannabis grow operation hidden beneath a baby’s crib in the master bedroom of a single-family home in Florida’s Miami-Dade County. In that raid, 31 pounds of pot were seized, worth an estimated $108,000. Some plants were hanging to dry on a makeshift clothesline.

However, law enforcement were less concerned with the cannabis they found, and more by the chemicals used by these growers.

“This is a story about people that are housing toxic combustible chemicals underground,” Detective Roy Rutland told CBS Miami a the time. “These chemicals combined can take down several homes. We’ve already seen that here in Miami-Dade County.” 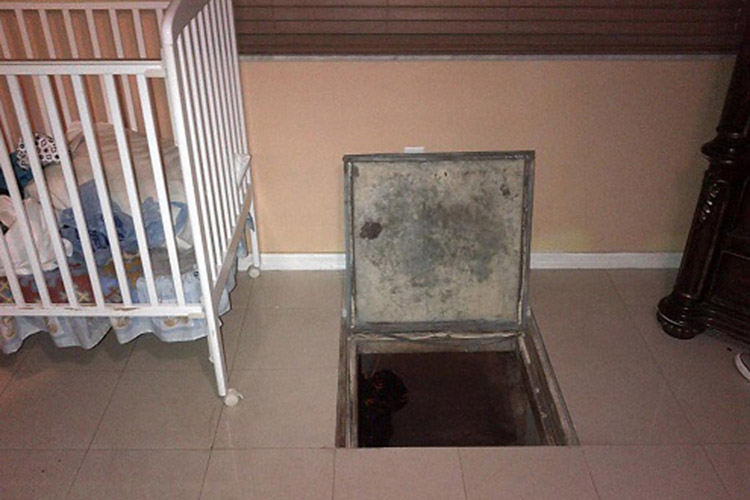 This at-home grow was hidden beneath a baby’s crib in a master bedroom in Florida. (Image courtesy of the Miami-Dade Police Department)