The number one reason growers get caught cultivating cannabis is because of their odorous gardens. When that skunky aroma hits the nose of a passerby or uptight neighbor, it could be game over for growers in illegal states. Whether you’re in close confines or have a snoop living next door, check out these low-odor weed strains that’ll help you stay under the weed radar.

One of the most famous indica strains of all time, Northern Lights is naturally low odor. It’s a cultivation favorite due to its fast flowering, resinous buds and resilience. Plus, it was bred to grown indoors, making it a good choice for beginner gardeners. Northern Lights produces a super-relaxing body high that’s great for insomnia, depression, stress, or just chilling out after work.

Durban Poison is a pure sativa that hails from South Africa and is nearly odorless. Its buds are known to be uplifting and covered in large resin glands. Plus, they’re typically rich in THC, testing between 15 and 25 percent.

This indica-dominant strain has a blueberry aroma, but it is subtle compared to other berry-smelling buds — or any other bud, for that matter. It produces a relaxing high and its nugs are slightly blue and covered in trichomes. Besides being low odor, Blue Mystic is loved by indoor growers for its fast flowering, typically only taking seven to nine weeks to bloom. 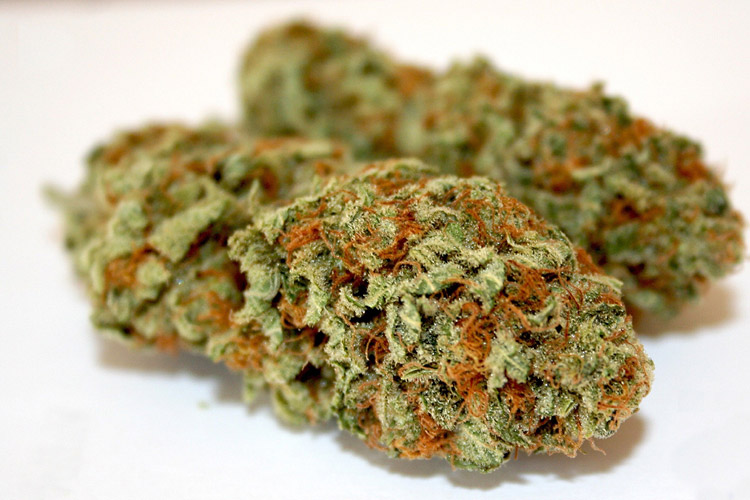 Blue Mystic produces a subtle berry aroma that is likely to go unnoticed by nosy neighbors.

This indica-dominant strain is popular among stealth and guerrilla growers for its low odor and compact size. Polar Express was also bred to autoflower indoors, making this strain easy to produce. Its buds test around 15 percent THC and produce a relaxing high with cerebral effects that are known to also have medical benefits, including combating muscle pain and inflammation.

Despite this indica-dominant hybrid’s name, Sharksbreath has a sweet yet subtle aroma. Its outcome is a stress-relieving yet productive high that’s great for daytime use, and also for tackling anxiety and depression. Indoor growers love this strain because it flowers in nine weeks, is squat, and has big, heavy colas that excel with the screen of green (SCROG) growing technique.

Papaya is popular with stealth growers because it doesn’t produce a strong odor and the little scent it does emit smells exactly like the tropical fruit it’s named for. An indica-dominant hybrid known to produce energetic, sativa-like effects, people like to use this strain for its calming effects and productive properties. Growers also like Papaya for its relatively short flowering time (eight to nine weeks) and its big buds covered in orange hairs.