Deep Green, Purple, Red — What Do The Different Colors Of Cannabis Flower Mean For Your High?

“You got that purp?”

Cultivator Kenny B says that’s a familiar refrain he hears from cannabis buyers in his area.

“You have to come with those colors,” says the Oakland, California cannabis grower. “Granddaddy Purple, Black Cherry Soda, Plushberry — people love those reds and deep purples.”

Like the dazzling colors of fruits such as pomegranates, blueberries and plums, cannabis has been known to provide a similar lightshow of alluring shades that entices consumers.

But what do those brilliant colors mean?

While the compounds in cannabis, known as flavonoids — which help to create various colorful pigments — can sometimes appear ultra-potent, the bright and bold shades do not necessarily mean greater THC content.

But many flavonoids can indeed coincide with different types of highs.

Here’s a look at what’s biologically behind some of those spectacular color explosions.

Blue To Purple To Pink Strains

This color palette tends to contain the flavonoid compound anthocyanin, also prevalent in fruits and vegetables like eggplant and pomegranate. The range of colors vary from purples and blues to magentas and pinks, and are exaggerated by pH levels.

Anthocyanin serves as a sunscreen for leaves, shielding the plant from different light spectrums and intensities. They are also known to be road signs for pollinators such as bees and hummingbirds. Purple plants — think Grape Ape and Black Russian — are typically associated with deep indica body highs.

This color spectrum contains the compound carotenoid, also present in carrots and sweet potatoes. Carotenoid is also what is present in the colors that create the bright foliage colors of fall. Highs with these hues tend to be more uplifting and heady, and are sativa dominant. Popular varietals include California Orange and Lemon Haze. 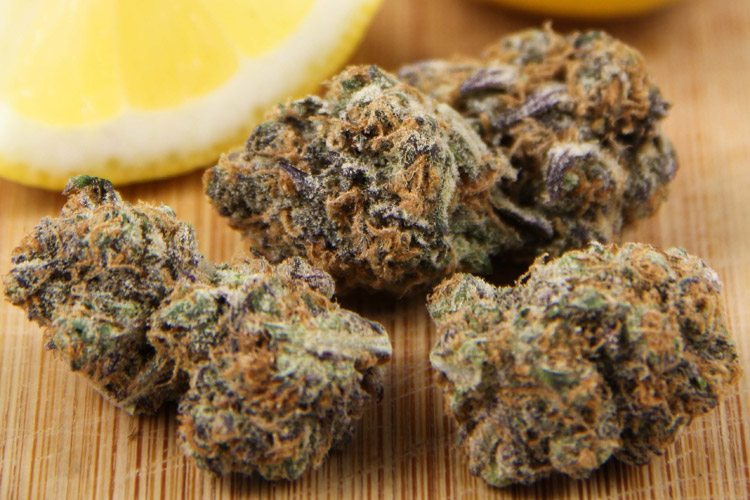 The Lemon Haze strain contains the compound carotenoid, which gives it a yellowish hue and is known for supporting cardiovascular health.

Large amounts of green in cannabis plants is generally associated with increased amounts of chlorophyll, created through the process of photosynthesis, whereby plants absorb energy from sunlight. As cannabis plants mature, they typically produce less of the dominant green chlorophyll pigment.

White To Cream To Yellow

Cannabis with tones ranging from creamy to yellow to white contain the flavonoid anthoxanthin. Present also in foods like cauliflower, onions and turnips, cannabis with high levels of anthoxanthin is prevalent in cooler climates, where the production of chlorophyll is inhibited. Think hybrids like The White or Acapulco Gold. These hybridized strains can lean either toward sativa or indica dominance, depending upon their breeding. 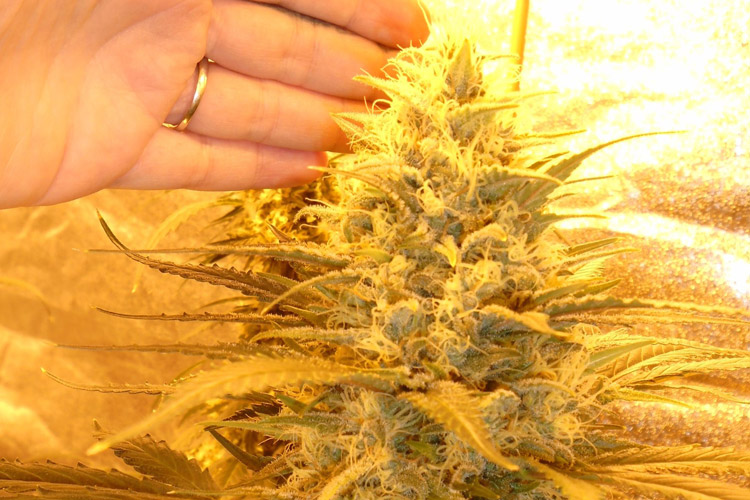 Anthoxanthin is found in Acapulco Gold, which is known to treat chronic pain.

High in lycopene, this compound is said to have antioxidant properties and is often touted as cancer preventative medicine. It’s also present in tomatoes and watermelon. Strains with a red tone include Red Dragon and Fruity Pebbles, both hybrids that pack a punch and can lean toward either sativa or indica.